5 Big Reasons to Choose React Native Framework for Your Next Mobile Application Project!

5 Big Reasons to Choose React Native Framework for Your Next Mobile Application Project!

The world of technology is growing through an exciting phase. New technologies are emerging and so as the terminologies associated with them. Similarly, the business of mobile app development is advancing at a very fast pace. It is being reshaped and adjusted according to the emerging new technology.

One such technology which is currently a subject of intense interest among Mobile App Developers is the React Native Technology by Facebook for Mobile Application Development.

Let us understand what it is and why it is trending high in recent times.

This is the main reason why React Native is finding ground among Mobile App Development Companies.

What plays an important role in the success and failure of two similar apps is the viewing experience a user derived from those applications. An app that is backed by React Native Framework is surely inclined to score points over an app that is supported by another framework.

Mobile App Development involves many technologies and support systems. React Native is one of them. What makes it stand ahead of any other framework is its ability to launch a mobile application faster and be fully compatible with iOS and Android.

React Native Framework forms a network of UI components to build the JavaScript Code. It has rich UI components that make the mobile app look native and beautiful. As it is UI focused, thus enables the app to load quickly and gives the user a hassle-free experience.

React Native Framework allows mobile app developers to use the same code for building applications for different platforms. It follows the approach “Learn Once Write Anywhere’’

Any business, be it of any form and at any scale can’t ignore the impact of mobile apps in scaling their business’s reach. Every company wants to make use of mobile apps to deliver more effective service to its customers. For this to happen, a better app with a rich viewing experience is mandatory. Thus, a framework like React Native comes into the picture. We are a Company of React Native App Developers providing the best business applications for mobile devices featured with rich React Native Framework.

Metizsoft is the laboratory where all emerging technologies are embraced and used for mobile app development. 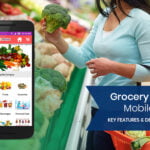 The Effective Features that an Online Grocery Shop should have & how much does it cost to develop a Grocery Delivery Mobile App?January 8, 2019
Why You Should Choose Magento 2.2?January 31, 2019

The Effective Features that an Online Grocery Shop should have & how much does it cost to develop a Grocery Delivery Mobile App?

The Effective Features that an Online Grocery Shop should have & how much does it cost to develop a Grocery Delivery Mobile App?

Unless you’ve been living under a rock, chances are you don’t need exhaustive statistics to persuade you of the importance of...