Why Should You Use Angular for Your Web App Development in 2022: Top Features & Benefits of Angular! 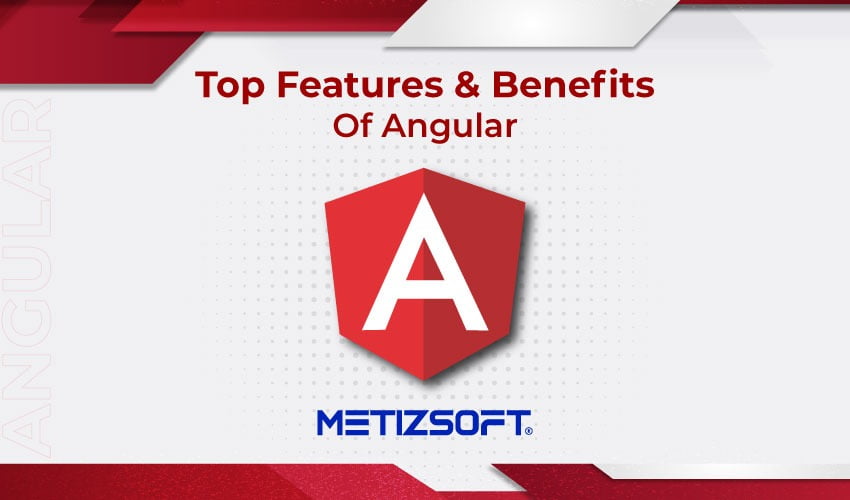 Today’s businesses are quick at adopting the latest advancement in technology to fulfill consumers’ basic daily requirements digitally. The obsession with staying on the internet most of the time and generating revenue through the apps has led to massive growth in web and mobile app development.

Well, such competitions have given wings to web and mobile app development companies to design and develop interactive, user-friendly single-page web applications to match people’s requirements.

In addition, to build such apps, companies are choosing Angular as their primary framework because of its versatility in functionality and scalable solution method.

Angular has come with the same league as ReactJS, Jquery, ExpressJs to build dynamic and robust web applications.

Its compatibility to translate static HTML documents into dynamic content and built-in MVC (Model View Controller) architecture have made it the first choice of many developers and web app development companies to develop single-page applications.

But, what made Angular so reliable, and why you should stick with it in 2022 as a prime web app development framework will be determined by the below elaboration.

Angular is an open-source, front-end JavaScript framework designed to build modern and dynamic single-page web applications. Google officially launched it in 2010, followed by the latest version, Angular 13, on November 3rd, 2021.

Since its release, it has dominated the front-end development work segments with modern architecture and robust features.

The surge behind Angular popularity as front-end development is its ability to eliminate extra code base developers might put for taking advantage of dependency injection and data binding.

Also, it allows developers to use HTML as the base template language. Anyone who desires to be a front-end developer, especially seeking expertise in Angular, needs to have a basic knowledge of HTML, CSS, and JavaScript.

The entire codebase of Angular runs around JavaScript, and as mentioned above, it allows developers to use HTML as the template language while working on web app projects.

The most significant asset in the front-end development framework is modular features, MVC, two-way binding, modularization, templating, and AJAX handling.

Brands like Google, Paypal, and Upwork are leading examples of using Angular as their primary front-end framework.

Why Choose Angular for your Next Web Development Project?

Choosing Angular over other frameworks for your web development project might be a better option for you. Its structural features and JavaScript codebase have made it simple and easy to understand for all front-end developers.

Also, it comes with a large community base that helps segregate complex methods easy to navigate in times of need. You will get timely support and updates, plus an easy learning curve to understand every specific detail without hassle.

You can easily cope with this front-end framework while designing /developing cross-platform, single-page web applications.

Considering Angular popularity and usage in the past couple of years, many Angular development companies like Metizsoft have developed robust and dynamic Angular applications to meet business requirements.

Though the new versions come with some staggering changes and dynamic components, the Angular developers’ community can still leverage it to the fullest.

How Effective Angular 13 can be in Developing Web Applications

As per experts, Angular 13 has enabled more streamlined architecture and modules to boost the overall web app development process. Also, performance-wise, it is way faster than the past 12 Angular versions.

The key features of Angular 13 are –

An Updated Version of Typescript

The previous versions of Typescript 4.2 4.3 have limited resources and missing features like the multi-language option, which was later included in the latest version, Typescript 4.4, to make it more compatible with the modern web development process.

With the inclusion of the latest JS format, ES2020, it has got a lot easier for developers to work and build new libraries and they don’t require ngcc this time.

Also, the newly included node packages in the APF helps in getting a lesser execution time than the previous one.

Angular 13 has improved its navigation functionalities and has added newly designed radio buttons and checkboxes to give the application a dynamic and modern look for a better user experience.

With an improved testbed, the DOM will now get clean by default, with each testing leading to faster and optimized test results.

The angular community has removed Microsoft Explorer 11 from its default browser settings to quicken the page loading time. Even heavy graphics and the latest CSS variable won’t come in the way of a faster loading page.

The above are some of the essential updates and features of Angular that the Angular community has included in the latest version to provide a seamless coding experience to Angular developers.

Below we will take a glimpse of some of the benefits of Angular as front-end web app development:

Since its release, Angular has gained immense popularity amongst the developers’ community in developing modern, dynamic web applications. It is the most preferred front-end web framework that helps establish futuristic web applications.

Angular has emerged as the best front-end web framework from modern web apps to single-page to cross-platform applications.

We have done it in the past and are committed to delivering the best possible results in times of need!